Globalization and changes in consumer demand in distributed manufacturing have resulted in many challenges for companies. To overcome this, companies can keep extra capacity, but this may result in excess stock in quiet periods. A second option is for companies to join together to create clusters, or federations, for sharing resources.

A resource sharing mechanism between manufacturing companies needed to be created, and at the same time the trustfulness of companies in decision making was to be considered. An agent-based simulation was identified as a solution to model the complex communication between partners to run the experiments effectively.

EPIC Centre of Excellence developed a model where companies are members of a federation. They receive orders and if they do not have the necessary resources, they can send requests to the federation center/platform. Companies which have free resources, can send offers to this same center.

Trustfulness is calculated by ratings given after each contract. Trust is an internal value based on direct interactions between companies. However, trust is not the only consideration. Reputation is a public perception value influenced by all the interactions made by the company and is similar to google reviews. These two ratings are given by the requester about the offeror after each contract. 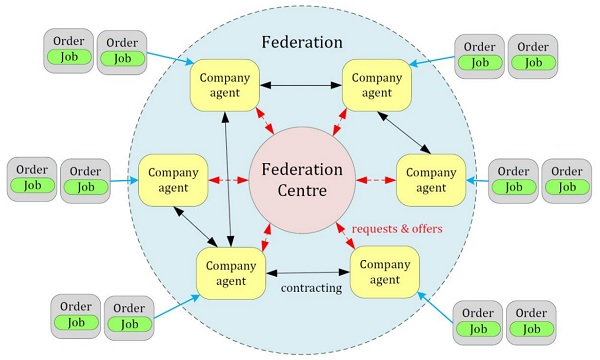 The aim of the simulation model was to provide an experimentation tool for investigating different scenarios and in this case 10 company agents were placed on the map of Hungary and the individual resource utilizations and reputation values were visualized during the model running.

The goal of the experiments was to create an effective mechanism that could be applied in real life and test the effect of realistic scenarios.

The first experiment compared the platform-based solution and direct communication between companies. The experiment considered different numbers of federation members and two different KPIs illustrated in the diagram below.

The second experiment tested the effect of a negative event that affected trustfulness. In the experiment, the performance of the company did not change, but the public perception or reputation value decreased as can be seen in the diagram below and represented by C09 – the red line.

The reputation value rose back to the original level relatively quickly, but the resource utilization of that company – illustrated by the gray line chart remained low for a long time because the partners made their decision based on individual trust and public perception values. The performance and the accuracy of the company did not change and because of this after some interactions the reputation level rose. In the case of the individual trust values, the increase was much slower because of the lower number of individual interactions, and this is why the resource utilization level also increased much slower.

Another direction for the future is to extend the company agents with a discrete-based factory model as agent-based and discrete-event modeling can be combined in AnyLogic.

Finally, more experiments should be run as the platform which is responsible for matching and providing reputation values for the companies has a global view in the system. This means that it can optimize, for example logistics roots and then the platform can see all the interactions, all the offers, and all the requests.

The case study was presented by Adam Szaller, EPIC Center of Excellence, at the AnyLogic 2021 Conference. 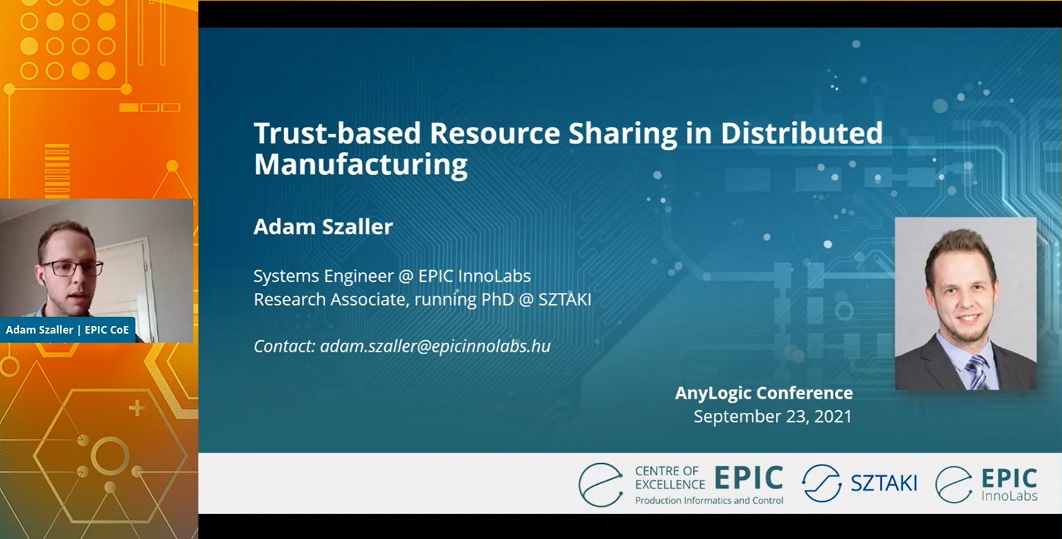