Fate is a leading Argentinian company in tire manufacturing and exporting. They have the largest and most modern tire industrial plant in Argentina, with more than 2,000 employees producing more than 5 million tires a year.

Fate wanted to adjust their transformation processes to increase productivity. So, they needed a flexible tool which would be able to analyze the performance impact of different scenarios. The problem was that this tool needed to be developed in a complex system considering standardized logic and criteria throughout the plant.

In general, they were not looking for a solution to an exact problem, but rather they wanted to take a holistic view of the plant. The model would allow Fate to analyze production volume and needs, workforce availability, workforce task and machine assignment, bottlenecks, and so on.

Fate contracted Eurystic to develop their model and simulation. AnyLogic was chosen to build this model and run the simulations because it could deal with complex and time dependent systems. Also, it was flexible, and dashboards could be built quickly. In addition, it had random components such as machine failures. AnyLogic enabled developers to run multiple iterations and custom experiments in order to compare different scenarios.

From a high-level perspective, the digital representation of the production system took an input to process and configure the simulator. The simulator then ran and showed the current and cumulative results through the user interface dashboards. This information could then be exported to another program.

The model used a combination of agent-based and discrete-event processes. Agent-based relied upon statecharts for agents such as machines and transportation staff and actioncharts were used for complex internal material handling logic. While discrete-event was the best approach for modeling the conveyor belts.

A simulation of this scale needed an extensive set of inputs and parameters as can be seen below.

Some of the inputs required were stored in their enterprise resource planning (ERP) software, but others were collected manually, organized, and given a structure for the model. It was important for this model to be constantly updated with the company’s latest information through ERP and reporting activities so that it could be used regularly.

The production schedule for all of the machines, except for in the last process, was determined by the logic and parameters of the model. The logic needed to be collected and standardized for each machine and the final rules of the model followed.

Transportation logic was similar to the production scheduling where rules were defined and priorities given in order to optimize the product flow.

Once the simulation was complete, the information was exported to spreadsheets and then compared with real-world results. After this, further analysis could be performed with the help of business intelligence software.

The model for the presentation used imaginary scenarios to protect confidentiality. Below are examples of the user interface. 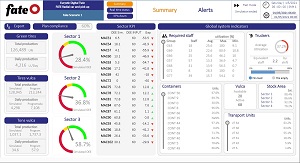 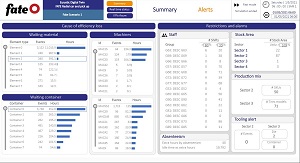 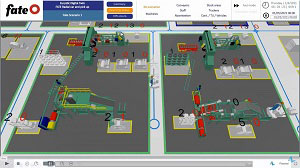 User interface examples from the simulation (click to enlarge)

In many cases, multiple iterations needed to be performed to arrive at the final answer. Results and potential outcomes included the following:

Thanks to the simulation many ideas could be tested. Those with the highest impact and lowest cost could be further analyzed and potentially implemented in the future.

The case study was presented by Damian Marino of Eurystic and Alejandro Paz of Fate at the AnyLogic Conference 2021.