Daltransugol coal terminal, also referred to as the Vanino Bulk Terminal, is located in the deep-water Muchka Bay. It is the most important transshipment point on the way to the markets of the Asia-Pacific region.

It is situated at the extreme point of the Baikal-Amur Mainline, and is one of the newest and most modern coal terminals in Russia.

The terminal is equipped with an automated wagon unloading system and a coal warehouse with a capacity of up to 1.2 million tons. The current pier is capable of receiving and handling Capesize vessels. In 2020, the terminal handled 23 million tons of coal. It has an automated conveyor network with a length of more than 4 km. The length of railway tracks is more than 50 km.

Daltransugol needed to increase the transshipment capacity of the terminal to 40 million tons of coal per year. At this stage, the specialists of Dilibrium conducted an analysis of the Daltransugol coal terminal.

They specified parameters of the technological process, made full-scale measurements of individual technological operations, conducted interviews with various specialists and terminal services, analyzed historical data on the operation of the terminal, and found statistical patterns. Then they used this information to build a model. 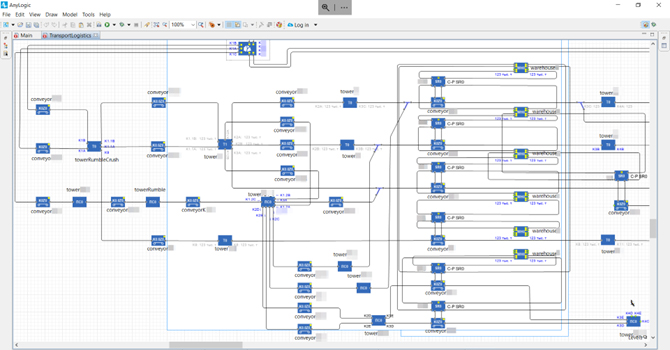 To solve the problem, a simulation model was developed with AnyLogic software. The development process consisted of the following stages:

2. Development of the model “AS IS”

First of all, Dilibrium decided to develop the “AS IS” simulation model of the terminal. This was important in order to set accurate values of the parameters of individual agents and algorithms on the constructed and sufficiently detailed model. The purpose was to verify the model in accordance with historical data. As a result of the verification of the terminal simulation model, it was possible to achieve high reliability in comparison with historical data for 2019-2020.

This result became possible due to the high degree of detail of technological processes in the simulation model.

To simulate technological processes and change the state or behavior of model objects, the following simulation approaches were applied:

3. Refinement of the model with “TO BE” scenarios

Several experiments were added to the verified “AS IS” simulation model with fine-tuned processes and parameters to test hypotheses for calculating the maximum throughput of the terminal. These included modified terminal spatial planning, a new layout, and new types of main technological equipment. In total, five different options for the configuration of warehouses and sets of basic technological equipment were implemented in the model. They corresponded to various options for the future development of the terminal. 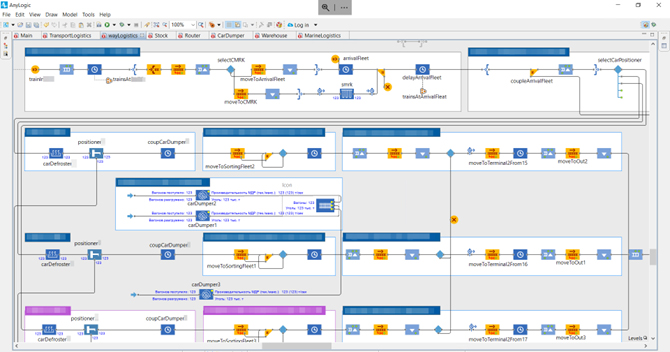 In addition to modeling railway and conveyor logistics, there was a difficult task to develop a cargo routing algorithm taking into account warehouse planning. In order to select and build a route, a large number of interrelated conditions and parameters had to be considered: 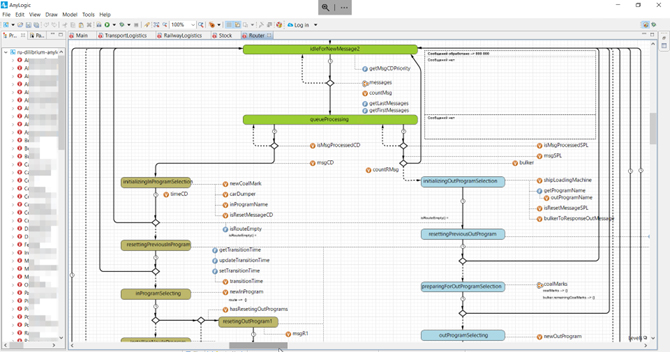 The model simulated a full calendar year, including seasonality and weather conditions. During this period, both operational data and statistics by year/month/day for all major processes and pieces of equipment were collected in virtual time mode. At the end of the simulation, the outputs were uploaded to a separate Excel file for further analysis of the results of the experiments.

Stochastics were implemented into the model, for example, random deviations from statistical data on breakdowns, weather conditions, and the coefficient of errors or inconsistencies when submitting trains and ships to the terminal. Conventionally, a ship could come to the pier, at which not all of the required grades of coal were in stock and the rest was still delayed on the way to the terminal.

The simulation model was verified through the “AS IS” stage. Dilibrium obtained extensive statistics for maximum productivity and for the indicators of each equipment node: maintenance and repair, operating hours, CTG, KPI, and other values. It became possible with the help of multiple experiments for each variant of the modernization stage. In addition, with the aid of the experiments, bottlenecks for different operations were identified.