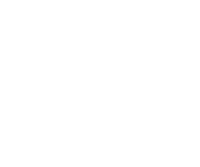 Transportation, and in particular the freight sector, has a very high energy demand. Oil’s higher energy return on investment, containerization, expansion of road networks, and deregulation of the trucking industry have resulted in a sector which is heavily dependent on fossil fuels. This is a problem that requires a rapid transformation in order to combat greenhouse gas emissions.

As a result, a researcher at The University of Canterbury had to generate a low-carbon design of a future freight system using a new set of tools. The problem was – what government investment now would provide the solution to New Zealand’s freight supply chain for the future?

New Zealand’s North Island was chosen as a starting point for this new development. The researcher developed a multimethod framework consisting of three main components that would address the current model limitations and create potential outcomes. The goal was to expand freight train supply chain analysis to inform low-carbon transition pathways.

The three main components of the framework were:

Official documents, databases, and open-source geographic data was used in the framework. 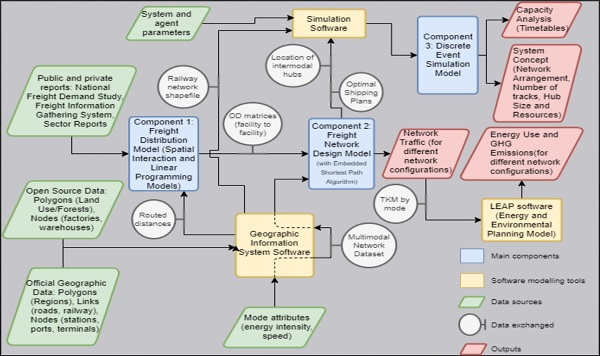 In general, this framework gave a new simulation component to traditional transport modeling approaches. Integration was achieved through a central GIS based optimization component.

Component 1 – Freight Distribution Model. This was a preliminary step that enabled data sources to be arranged for further stages. The final output consisted of a data set with several different line features representing destination pairs between different facilities.

Component 2 – Freight network GIS based analysis mode. This was used to build a virtual network using elements from the field of multimodal transports and GIS. It enabled different layouts or scenarios based on energy and travel time optimization. The process involved loading a network data set along with the locations of the facilities, running a shortest path optimization, extracting relevant information, and then building a database.

Optimization was performed using either time of delivery or energy used as cost attributes.

Different outputs were derived, such as traffic assessment, location of intermodal terminals, and optimal delivery plans.

Component 3 – Discrete-event simulation model. The researcher used AnyLogic as it enabled the integration of GIS maps, provided a multimethod environment, and specific libraries for simulation of railway systems, manufacturing, and warehouse flows.

Agents were facilities, terminals, ports, trucks, and trains. These agents interacted with each other as orders were received.

The performance of the system varied as the network infrastructure changed. Such changes included single tracking or double tracking of the railway network, train cruise speeds, and terminal parameters.

Agent parameters were taken from the database created in the second component. AnyLogic facilitated the modeling of this process and enabled the interaction of the model with a central database.

Component 3 provided the flexibility needed to connect networks planners, transport, and terminal operators. It was able to evaluate network and terminal capacity, while delivering a conceptual design that could meet the current freight requirements with half the current energy demand. 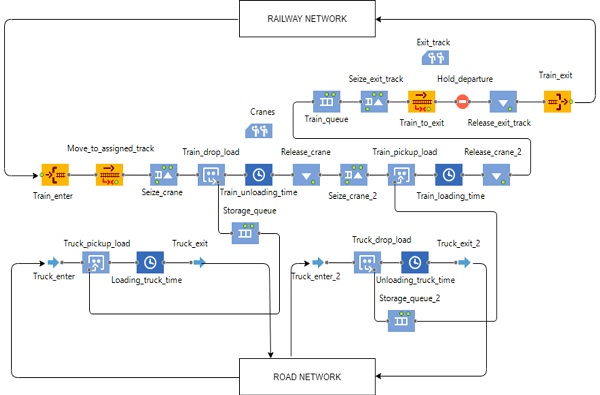 6 simulation experiments were run, and in the table below the different parameters which were set can be seen. The experiments showed how the model could be used to streamline the design. 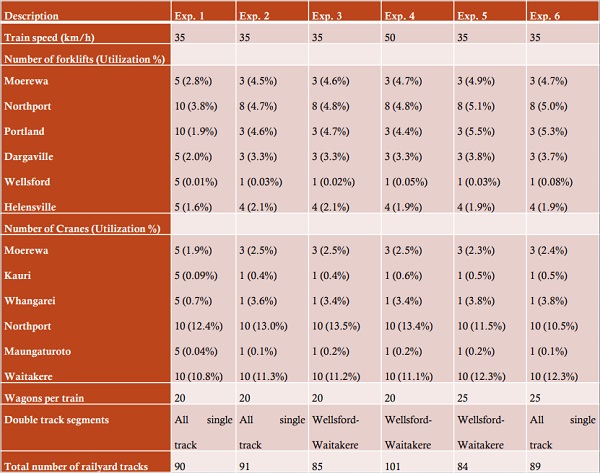 Results from these experiments are shown in the chart below. 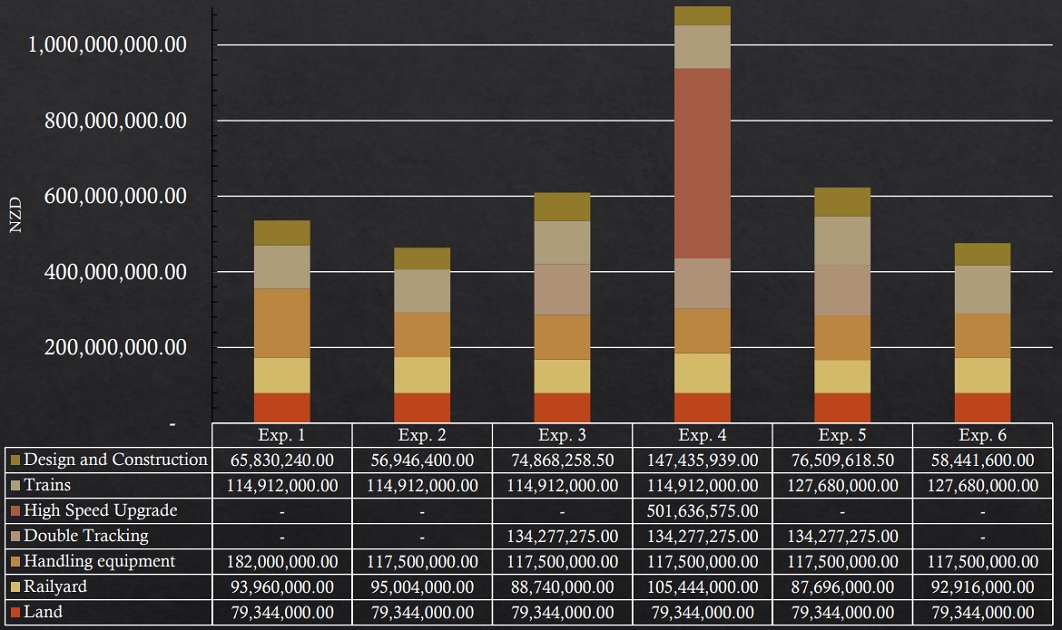 Experiments 1 and 2 had relatively low cost but were unsatisfactory in terms of performance.

Experiment 4 explored faster trains and led to a further 500-minute reduction in round-trip time. This reduction in travel time could give the possibility of adding more trains as required. In addition, the time savings could enhance additional clearance for loading and unloading operations at terminals. However, this was the mostly costly arrangement because of the need to upgrade the network for faster trains.

In experiment 6, the impact of the number of wagons was observed and more wagons could result in a slightly increased round-trip time if compared with experiment 1. It should be noted that, all trains in this experiment still managed to do a round-trip before the end of the day despite the low speed and single tracks. This was the most cost-effective solution and proved that substantial reductions in energy demand and greenhouse gas emissions do not necessarily require costly measures.

In conclusion, the results suggested that the implementation of intermodal terminals should be a priority, and accessibility to this intermodal network is key. A fully intermodal setup could reduce urban congestion as well as energy consumption and greenhouse gases by 48% and 47%, respectively.

In the future, investments should prioritize the development of intermodal hubs over other costly alternatives.

The case study was presented by Patricio Gallardo, of The University of Canterbury, at the AnyLogic Conference 2021.