Exploration of Satisficing Behaviors in a Complex Financial Economy

Economics is composed of numerous theories, but in this case only three were identified.

The second says that decision making is driven by satisficing behaviors – the choice of the first satisfactory outcome, rather than the optimal one.

Finally, prospect theory, which attempts to understand how problems are formulated and options constructed to make better decisions.

The solution was to develop an agent-based model of economic and financial cycles using the three previously mentioned theories.

This could be done by developing a behavioral agent-based model to better understand the role of decision making under uncertainty in a complex financial system. Then, simulating multiple financial system outcomes by varying the range of conditions and seeing tangible changes in economic settings.

AnyLogic was chosen as the right tool for the researcher because it could visualize outcomes of a system and behaviors, connect to data sources, or create and manage data, deal with highly complex agents with decision capabilities, and so on.

The design and the theory needed to be connected to build the model. The simulation could not cover all aspects and so limitations or environment considerations were built into the design. These included:

Each agent in the model had different attributes and was assigned to different tiers as shown in the diagram below. 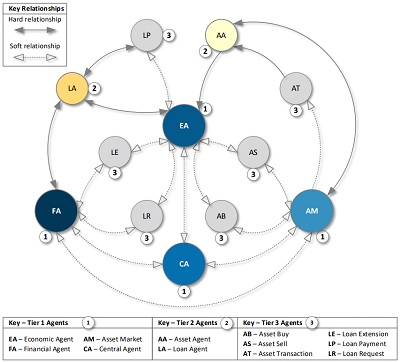 The Economic Agent (EA) was the center of the model. It came from the decision-making process and so it had a decision engine. It received inputs and could define outputs. As a result of these outputs, it attained either a positive, negative, or neutral state, which could be further strengthened e.g., very strong positive.

Defining the state resulted in an intent to act. This intent could result in future projections of price, for example. The EA would also use historic information to evaluate decisions in the future using its reasoning ability.

The Asset Market (AM) received a buy or sell order from the EA and so acted as a clearing house to ensure that the system continued to operate.

The Asset Agent (AA) acted as a portfolio and continuously updated throughout the cycling, holding the three key states of positive, negative, or neutral.

The Financial Agent (FA) looked at economic and financial policy. After looking at the attributes of the EA, it determined the asset portfolio equity and the financial state. It also considered the overall aggregate of the system.

The Loan Agent (LA) completed the transactional mechanics which included holding the values of such important factors as interest rates, credit defaults, and so on.

The controlling Central Agent (CA) facilitated a number of macroeconomic functions, which included production, employment, and more. This CA sent messages with this information to the other agents in the system.

The Asset Market and CA were designed to shape emotions. Thus, they sent signals irrespective of the actual situation in order to start shaping the agent population and determine how they were going to behave.

The simulation performed by the researcher focused on 26 individual conditions and within these, there were a total of 78 options and so a huge range of behaviors were covered. As a result, the permutations were extensive.

Five themes were covered in the research:

The results of the simulation enabled the researcher to reach some conclusions regarding decision making strategies and behaviors in a complex financial economy. These included:

The case study was presented by Dr. Dennis Feher, Sydney University, at the AnyLogic 2021 Conference.