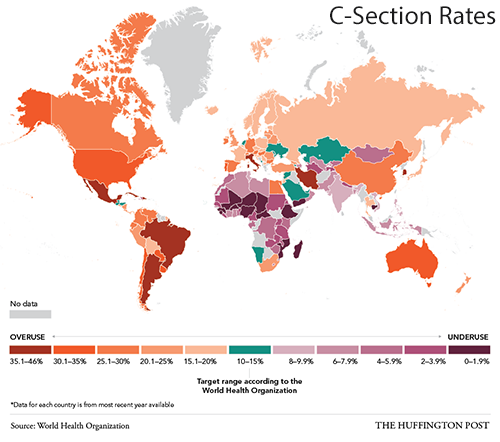 Over the last 40 years, the U.S. rate of cesarean delivery has increased dramatically. In 1965 the rate was 4.5 percent and in 2012 it was 32.8 percent, an increase of over 600 percent. More than one million babies a year-one in every three American babies- are now born with a cesarean delivery. And cesarean delivery is now the most commonly performed surgical procedure in the U.S. In 2009, childbirth-related hospitalizations accounted for 7.6 percent of all inpatient costs, totaling $27.6 billion. Many of these cesarean deliveries—some researcher say 50 percent of them- are unnecessary.

The model addresses the following questions:

Why Alan Mills Chose AnyLogic?
"Compared to other agent-based simulation modeling platforms, AnyLogic has sophisticated capabilities that make it an excellent choice for serious business applications:
- It easily handles large numbers of agents interacting on complex GIS environments.
- It has sophisticated message-passing capabilities for agent communications.
- Its clever presentation canvas and tool palette help you easily build sophisticated yet friendly user-interfaces.
- Its statecharts, flow diagrams, and visualization capabilities make it easy for you to show agent behaviors.
- It works smoothly with Excel, the data and analytic tool of choice for most businesses.
- It enables sophisticated sensitivity testing and scenario analyses.
I've tried most of the major agent-based simulation modeling platforms. For my work in health policy simulation, AnyLogic is the best choice."
- Alan Mills, FSA MAAA ND, an independent family practice physician and research actuary